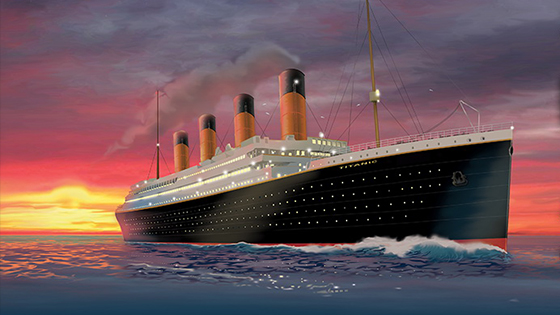 The 14th of April 2012 was the centenary – the 100th anniversary – of the sinking of the passenger ship Titanic in the north Atlantic. This podcast is about Titanic. I hope it will help you to learn some new words and expressions about ships and the sea, and that you will learn about “unsinkable” words. (Don’t know what “unsinkable” words are? Then listen carefully to the rest of the podcast!)

Titanic has appeared in one of these podcasts before. Just over a year ago, we visited Belfast in Northern Ireland and the shipyard where Titanic was built. When she was launched, Titanic was the biggest ship in the world, and one of the most comfortable and luxurious. One hundred years ago last week, she set sail from Southampton on the south coast of England on her maiden voyage to New York.

On board, there were over 1300 passengers. About 300 of these were First Class passengers, who enjoyed facilities such as restaurants, cafes, a library, a gym, a swimming pool and a telegraph office which could send radio messages back to families and business colleagues on shore. The First Class passengers included some of the wealthiest and most influential people in the world. Most of the passengers, however, travelled Second or Third Class, in much more humble conditions. Then there were 885 crew members, including 300 men to look after Titanic‘s huge steam engines and feed them with coal. There were also large numbers of cooks, waiters, cleaners and other people to look after the passengers. There was a cat too, with her kittens.

Titanic called first at Cherbourg in France and then at Cobh in Ireland before setting out across the Atlantic. Then, shortly before midnight on 14 April 1912, when she was 600km south of Newfoundland in Canada, she struck an iceberg. Slowly the ship filled with water. The crew launched the ship’s lifeboats, but there were not sufficient places in them for everyone. Over 1500 of the passengers and crew died in the freezing waters of the Atlantic; only 710 were saved.

The sinking of Titanic shocked and horrified people in both Britain and America. They were shocked that there were not enough lifeboats. They were shocked that so many people had died, and that the families of many of them were left in poverty. Nowhere was the shock greater than in Southampton, where many of the crew had lived. It is said that every street in the city had at least one family who had lost someone in the disaster. Above all, people in Europe and the United States 100 years ago believed in technology and progress. They thought that modern technology and engineering could do almost anything. They were shocked to learn that nature could so easily destroy the biggest and most advanced ship in the world.

The story of Titanic still fascinates people today. The wreck of Titanic was rediscovered on the bed of the Atlantic in 1985, and many items such as crockery and bits of luggage were brought to the surface and exhibited for people to see. There have been countless books and films about Titanic‘s first and last voyage, and theories about what really happened and who was to blame for the sinking. In Britain in the last few weeks, we have had several special television and radio programmes to mark the centenary of the disaster, and the film Titanic starring Leonardo DiCaprio and Kate Winslet – a film which you either love or hate – has been re-released in 3D, so that the iceberg looks even more scary. Some people have even dressed up in Edwardian dress and gone on a special cruise to the place where Titanic went down. On board the cruise ship, they have enjoyed some of the food that was on the menu in Titanic‘s restaurant. I am sure that they had a great time, but I do not think I would have enjoyed the trip.

Now for some grammar! Look at the verb “to sink”. It is one of a group of English irregular verbs where the vowel changes twice in different tenses – ‘Titanic sinks (present tense), Titanic sank (simple past tense) and Titanic has sunk (the imperfect or “has” tense). Other verbs with the same pattern are sing (I sing, I sang, I have sung) and ring (the bells ring, the bells rang, the bells have rung). If you can think of any more, put a comment on the website to tell us.

And finally, many people 100 years ago said that Titanic was unsinkable. “Unsinkable” means “cannot sink, or cannot be sunk”. How wrong they were! There are lots of words in English with the same pattern as “unsinkable”, that is “un” + something + “able”. For example, if you say that something is “unforgettable”, you mean that you will never be able to forget it. If something or someone is “unlovable”, it means that you cannot love it. You can call words like this “unsinkable” words if that helps you to remember what they mean. There is a quiz on the website about some of them. Have fun!